Update: At the request and direction of the property owners, citing insurance and other issues, the District will not be using volunteers for its ongoing flood mitigation efforts or deployment of Tiger tubes. However, we very much appreciate the community’s willingness and eagerness to help!

On Sunday, May 5 the Board held an emergency meeting to discuss flood mitigation efforts in the face of rising waters on the Brazos River. The Board approved moving forward with the acquisition and deployment of Tiger dams and other equipment along an alignment running from the northern boundary of the District to the existing “Rio Vista Berm” (roughly the same alignment as the “DRS Berm” discussed at District meetings) and to scale the response in accordance with river projections. We are currently undertaking efforts to deploy a section of Tiger dams being lent by FB LID 7 on the lowest elevation of the proposed berm alignment, plug the outfall at DRS Road, and are exploring the use of sandbags along a portion of the southern boundary of the District.

As of this update, the Brazos River is projected to crest at 46.1 ft. on Friday morning, May 10. The District currently estimates its risk of flooding to begin at approximately 50.5 ft. Hopefully, this remains an exercise and the river stays within its banks.

Due to projected rising river levels, the District is reminding residents that they can and should monitor the level of the Brazos River at Richmond. The River level is currently projected to peak at 42 feet on Tuesday morning (April 30). The District estimates that its risk of flooding from the Brazos River begins at a river elevation of 50.6 feet. Emergency alerts, if any, and other information regarding potential flooding will be issued by the Fort Bend Office of Emergency Management, and may be monitored at http://fbcoem.org.

This weekend is the 2019 Emergency Preparation Supplies Sales Tax Holiday in the State of Texas. You can purchase certain emergency preparation supplies tax free beginning at 12:01 a.m. on Saturday, April 27, and ending at midnight on Monday, April 29. There is no limit on the number of qualifying items you can purchase, and you do not need to issue an exemption certificate to claim the exemption. Please visit the Texas Comptroller’s Website for more information, including a list of qualifying and excluded supplies. Hurricane Season is just around the corner. Don’t wait until the next storm is in the Gulf before preparing yourself and your family. 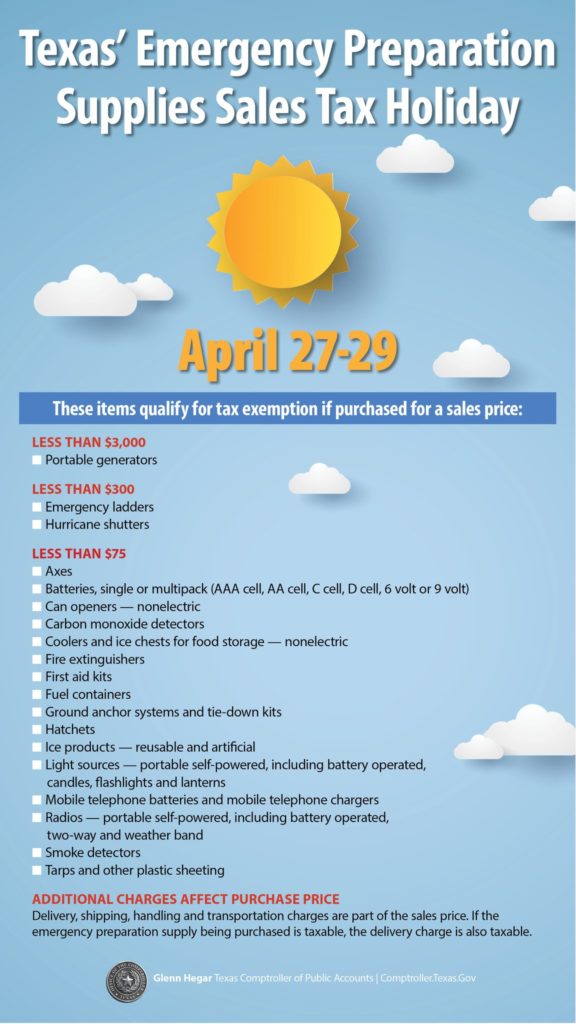